Move over WhatsApp. Here comes a revolutionary chatting App that has taken the mobile messaging to another level.  With this, you are able to send and receive messages even when you do not have an actual internet or wi-fi data connection. 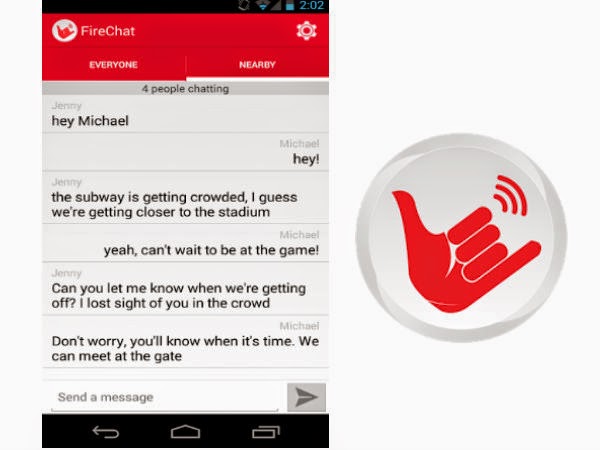 Yes, you read it right.  This Android and iOS-enabled App uses Open Garden’s Nesh networking technology and Apple’s Multipeer Connectivity framework — essentially a peer-to-peer feature that lets you share messages with other App users nearby.

“FireChat allows the device to connect directly to others nearby using Bluetooth, peer-to-peer wi-fi or traditional wi-fi networks so you do not actually need a data connection,” Micha Benoliel, CEO of Open Garden firm that developed the App was quoted as saying.

The Apple’s Multipeer Connectivity APIs can be used for everything from collaborative editing and file sharing, to multiplayer gaming and sensor aggregation, said a report in wired.com.  How does it function?  The App browses for other users nearby while simultaneously broadcasting to peers that it is available to connect to.  This allows you to be invited into a “session” with multiple users.Once a session invitation is accepted, you can directly communicate with those other users independent of a cellular signal or Wi-Fi access.

This creates what is called “wireless mesh network”.  According to Benoliel, “Messages also get deleted as soon as you close the App so you remain anonymous.”

However, in “Nearby” mode, you do not have any choice over who receives your messages — they go out to anyone within range, the report added.  Apple sold 700 million iOS devices by last October. Many are already using the latest Multipeer Connectivity-supporting version of iOS.  Within a week of its launch, FireChat has been being downloaded from the App Store more than 100,000 times a day.

2 thoughts on “App that lets you chat without data connection”