— Multiple exploits, clipping faults, and boosts, etc. fix based on the feedback of Oliv1er and timure of the MapInk Discord
— Fixed spawn boost exploit (thanks Marius)
— blocked guns going out of CT spawn so much with a big sign. (thanks Fnugz)

[MISC]
– Pings no longer highlight players. This eliminates any instances of being able to reveal a hidden enemy.
– Fixed a bug that caused the incorrect footstep sounds to be played on some surfaces.
– Fixed short-handed bonus being given in Guardian mode.
– Fixed visual shuffle in map vote at end of the match. 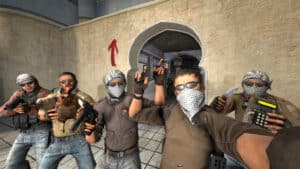