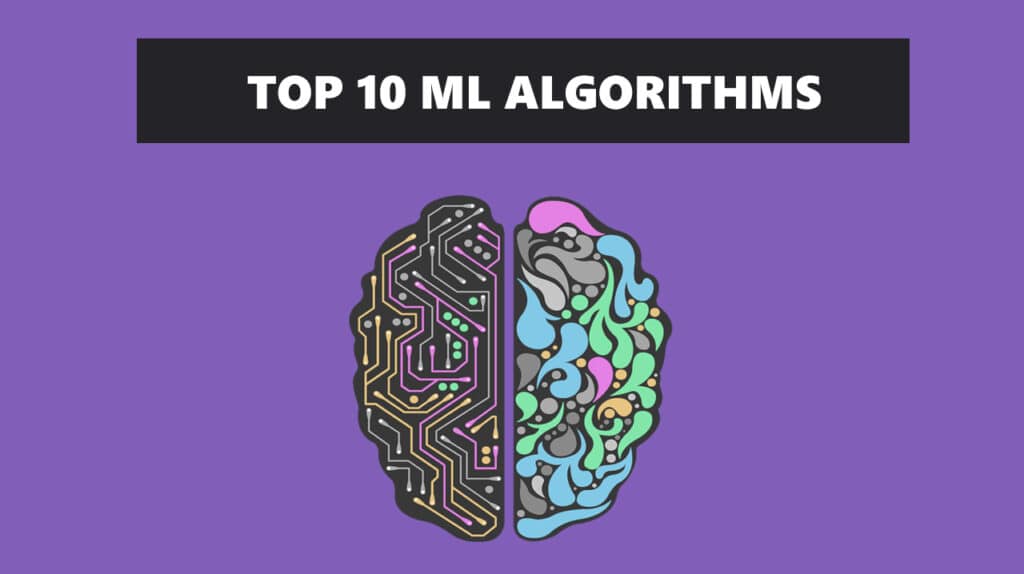 ML algorithms study is regarded to be the ‘Sexiest Job of the 21st century ‘as shown in the Harvard Business Review article. For beginners who are eager to study Machine learning basics, here is a great quick guide to the top 10 Machine Learning Algorithms used by ML programmers that you must know.

Machine Learning algorithms do not require human intervention, they are able to study data and advance from experience. Learning data entails studying the function that plots input and output and studying the unseen structure from unlabeled data. Ensure you choose the right machine learning task that is appropriate to your problem. Try different Algorithms for every problem to evaluate their performance and then choose the best.

A basic understanding of varying types of ML Algorithms will enable you to understand better on how algorithms work.

They are 3 main types of Machine Learning Algorithms:

Supervised learning is described as training where algorithms use labeled datasets to plot the function from input to desired output variable. The algorithms are trained under supervision to reach a certain judgment to enable them to execute the practices later on its own.

This type of machine learning algorithm allows the agent to use reward feedback in order to reinforce a behavior. It learns by relating to its surrounding environment rather than by being taught. They are usually used in robotics. Robots basically learn through receiving feedback and exercising trial and error to know the next course of action.

Linear regression is the easiest of all algorithms to understand. It shows the relationship of variable(x) in relation to variable(y). It illustrates the effects of a dependable variable where change occurs in the independent variable. Its commonly used for presentations by insurance firms, forecasting sales, and analyzing risk assessment in health.

Naïve Bayes is a simple but powerful algorithm. This probability model calculates data using Bays Theorem. The Naïve algorithm got its name from the assumptions that variable input is independent of each other. This Algorithm is used for indexing scores, ranking pages, and sorting data categorically.

KNN (K nearest neighbors) is an ML algorithm that is effective and simple. It uses the whole training dataset. When a new data outcome is required the algorithm searches for the most similar K examples through the whole training set and summarizes the K instances output.

Also Read: Algorithms or Human Beings – Who are the Better Decision Makers?

Market basket analysis widely uses Apriori algorithms to look for combinations of things that regularly co-appear in databases. The relationship rules are made after the threshold for support is crossed. The principle behind Apriori is that if a set of items is common, then all subsets related must be common.

K-means is a Machine Learning Algorithm used to collect related data into clusters. It works by classifying unstructured data into different ‘K’ groups ‘Each dataset comprises a collection of structures and the algorithm orders the unstructured data and classifies them in relation to specific features.

Principal Component Analysis (PCA) is used for speeding exploration of data and making correlations by minimizing the number of variables. Maximum variance in the data is taken into a different coordinate structure with axes named ‘principal components’. It categorizes patterns in items and targets to make correlations of variables in the items data. Whatever relationships the PCA finds are shown on similar (but smaller) dimensional structures. The algorithm is used in applications such as, stock market forecasts, gene expression study, and in pattern grouping tasks that overlook class labels.

The Random Forest ML Algorithm is used for both grouping and regression analysis jobs. It forms a forest using trees and makes the trees random. Random forest is almost similar to the decision trees algorithm, the main difference is that nodes are splinted on random features, then the best split is chosen but it ends with alike structures and related predictions. Thus after creating a random decision tree, the final prediction is determined by outcome with high votes count. This algorithm is normally used in industrial applications.

AdaBoost was the first effective boosting algorithm established for binary classification. Adaboost is an ensemble system that attempts to build a solid classifier from some weak classifiers. It is created by structuring a model from training data, then building another second model which attempts to correct the mistakes made from the original model. It keeps adding models until the training set is perfectly predicted or the models are added to maximum numbers

1 thought on “Top 10 Machine Learning Algorithms You Should Know”