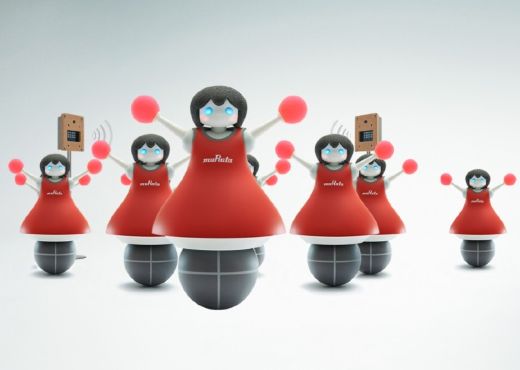 Robots are taking over the world! Well not literally but in a manner of saying after observing the rise in development and invention of new robots. . We have seen many new technologies and concepts and a major part of it is contributed by Japan. Japan, known as the master of technology in the entire world has come up with a new design of cheerleaders. Yes those bouncy, curvy entombment of enthusiasm but in a different approach, in a metal body. While this may not seem enticing at direct imaginative point of view, but it sure hell is quite amusing.

So-called swarm robots, which have recently emerged from robotics labs, have long been a staple of scary science-fiction films. But a new swarm robot group from Japan puts a distinctively “kawaii,” Japanese for cute, spin on the concept.  The Murata Cheerleaders are the latest iteration of androids from Japan’s Murata Manufacturing. They are another proposition entirely being an army of small robots that balance on metal balls, dancing and flashing lights in unison. There mesmerizing balancing technique is unique. The Cheerleaders use gyroscopic sensors with inverted-pendulum control to stay upright which, according to Murata’s Koichi Yoshikawa, is a significant challenge in itself. Also known as ballbots, robots that can hold themselves upright while balancing on a sphere were first developed about nine years ago by researchers at the University of Tokyo, Carnegie Mellon University and other robotics labs. While they’re able to maintain their balance on a ball even when given a light push, none has had the humanoid design of the Murata cheerleaders.

Unveiled Thursday in Tokyo by components maker Murata Manufacturing, each bot looks like a cartoonish girl sporting a red skirt and short black hair.  But in order for a group of the robots to dance together, they need to be outfitted with ultrasonic microphones and infrared sensors to detect objects around them and work out their relative positions. Technology developed in collaboration with researchers from Kyoto University helps communicate each robot’s location and allow them to perform in synchronization. While the routines are pre-programmed so far but a system enabling real-time editing is in development currently to increase the efficiency. The firm spent about a year-and-a-half developing the cheerleader robots, a task that involved some 20 engineers. Like many other highly sophisticated, gorgeously designed robots developed by high-tech companies in Japan to be corporate ambassadors instead of viable products, the cheerleaders will not be put on sale. Instead they willdrum up attention for Kyoto-based Murata, which marks its 70th anniversary in October. It wants the world to know that it controls sizeable market shares for components used in smartphones, computers and automotive electronics.