In order to improvise satellite navigation or report on weather observations, NASA has now introduced its ‘Remote Robotic Oxidizer Transfer’ technology (Ground breaking Technology). This will NASA to provide better services to satellite orbits. A team at NASA’s Kennedy Space Center in Florida, collaborating with counterparts at the agency’s Goddard Space Flight Center in Greenbelt, Md., recently demonstrated groundbreaking technology that could add additional years of service to satellites.

Engineers at Kennedy are performing the design, development and qualification testing of the critical hypergolic propellant transfer system for a simulated servicing satellite under the leadership of Tom Aranyos, technical integration manager in the spaceport’s Fluids and Propulsion Division and Gary Snyder, project manager for the satellite servicing project at the space center.

“Kennedy’s role is to develop a propulsion transfer assembly in collaboration with Goddard,” said Aranyos. “We are actually involved in designing, developing and testing satellite hardware that could be used in the future to refuel a satellite.” Benjamin Reed, Deputy Project Manager of Goddard’s Satellite Servicing Capabilities Office (SSCO), expressed appreciation for resourceful efforts of the group at the Florida spaceport in support of the project. “The Kennedy contingent was extraordinarily creative and innovative in the ways that they repurposed shuttle hardware, miraculously negotiated facilities in extraordinarily tight scheduling pockets and designed new technologies to match an immensely challenging problem set,” he said.

According to Pepper Phillips, NASA’s director of Engineering and Technology at Kennedy, the Florida spaceport’s skills in preparing vehicles for launch now are leading to its employees being asked to support development of in orbit satellite servicing capabilities. By choosing Kennedy, project participants also were able to use existing equipment, facilities and excess Space Shuttle Program hardware saving several million dollars in development costs.

“Goddard came to Kennedy near the end of the Space Shuttle Program to leverage our expertise in hypergolic propellants. They wanted to use our know-how to help design an in-orbit satellite propellant servicing system,” added Nufer.

Hypergolic propellants such as hydrazine and nitrogen tetroxide are the most frequently used fuel and oxidizers for maneuvering satellites in Earth orbit. Kennedy leverages expertise from processing and launching spacecraft developed at other centers and has branched out to become a part of the designing process of a flight propellant transfer system for the in orbit satellite servicing project. 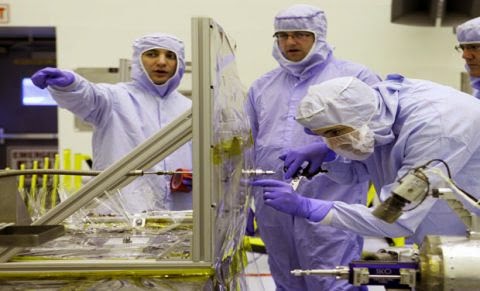 The most recent testing at Kennedy took place in the Payload Hazardous Servicing Facility (PHSF) and has focused on moving from a proof-of-concept phase to building the first engineering development unit. During February 2014, SSCO demonstrated that a remotely operated robot – with supporting technologies – could transfer oxidizer into the tank of another orbiting spacecraft not originally designed to be refueled. Kennedy’s propellant transfer system was an essential part of this Remote Robotic Oxidizer Transfer Test, or RROxiTT.

“The Kennedy folks developed the propellant transfer assembly, what we call the PTA,” said Matt Sammons, a robotics tools engineer with Stinger Ghaffarian Technologies Inc. at the SSCO. “We have been working heavily with the robotics and the fueling tools that will receive the propellant from the Kennedy-provided PTA and deliver it to the simulated client satellite.”

The team at Goddard shipped an industrial robotic arm to Kennedy for the test. From 800 miles away in Maryland, the team remotely controlled the robotic arm with its attached SSCO oxidizer nozzle tool to connect with a propellant fill and drain valve on the simulated satellite’s servicing panel. Downstream, the Kennedy-provided propellant transfer system and hose delivery assembly flowed oxidizer through the tool into the client fill-drain valve, with all hardware located in the PHSF in Florida.

“We directed the hypergolic propellant to flow at the various flight and client pressures and flow rates to prove the PTA concept worked,” Aranyos said. The latest test involved about 45 different Kennedy players who contributed to make it all happen. While the robotic arm was being operated from Goddard, Kennedy personnel monitored operations in the PHSF from an adjacent control room.

“In addition to the individuals working directly on the test, several outside organizations and companies were called upon to provide services such as inert gasses, precision cleaning, component fabrication and other services needed to successfully perform the integrated test,” Snyder said.

Following the mechanical robotic interconnects and leak checks, the Kennedy team performed the transfer of nitrogen tetroxide using flight-like concept of operations parameters. Because of the highly corrosive and toxic nature of the hypergolic propellant, those technicians and engineers required for standby emergency operations in the PHSF high bay, and performing manual portions of the procedures for test setup and post-disconnect operations, wore protective Self-Contained Atmospheric Protective Ensembles, or SCAPE suits. “The focus of the work was not only in the Fluids Division, but included mechanical involvement, the Safety Department, the Ground Operations Directorate, the electrical and controls that were involved, all the wiring and interconnects to Goddard,” Aranyos said.

“We have over a thousand different tests we’ve run to date with Freon, with water and with the hypergolics,” Aranyos said. “We now have to get through that series of test data and we’re taking that and putting it with lessons learned into the actual flight development specifications which we will use to build and qualify the flight hardware, hopefully starting with the fiscal year 2015 budget.” Aranyos says that finding people willing to continue participating in the project has been easy.”This project has not only been a challenge, but it’s been a lot of fun for the entire team,” he said. “I’ve never had to ask for a volunteer for this project. People just raised their hands and worked nights, weekends, whatever it took to get this job done.”

“The project is very dynamic, diverse and exciting,” he said. “It’s really wonderful to have fun being on the cutting edge of technology. I think what we’re doing here in trying to develop and mature technology that has applications in orbit and in the future of the space industry.” The success of the recent testing holds many possibilities. On Earth, RROxiTT technologies can also be used to robotically fuel satellites before they launch, keeping humans at a safe distance during an extremely hazardous operation.

The full contingent of operating spacecraft is right around 1,000, with more than 400 in the geosynchronous (GEO) Earth orbit belt some 22,000 miles above Earth. By developing robotic capabilities to repair and refuel these spacecraft in GEO, NASA hopes to add precious years of functional life to satellites and expand options for operators who face unexpected emergencies, tougher economic demands and aging fleets. A geosynchronous equatorial orbit is a circular orbit 22,236 miles above the Earth and thus appears motionless, at a fixed position in the sky, to ground observers.

Phillips believes this also is the beginning of new capabilities for Kennedy, particularly for the center’s engineering and design capability.”We have largely focused on ground processing and ground operations, and we’ve earned our expertise in that area,” he said. “In this realm, it’s literally spacecraft development work and it’s venturing out beyond our traditional work. It’s challenging our people to be better engineers and better scientists.”