One of the most popular media player, VLC, has been released on the Windows Store for Windows 8. The app is still in beta mode and can be downloaded for free. For now, certain bugs have been reported as the app has just made its debut on the new platform. After the bugs are hopefully fixed, we might see a stable official release soon.
Compared to the desktop version of the app, there is a general lag while playing videos including some audio bugs as well. VideoLAN, the developer of VLC, has said that the new Windows 8 version is nearly as stable as it should be.
The app features are the same as its original version. The app is capable of playing almost every video format and supports music playback apart from MKV support and FLAC support. It is also compatible with both x86 and x64 versions of Windows.
The application version 0.2.0: work on Windows 8.0 and 8.1: too many people are still on 8.0, so we had to use that. This decreases the stability of the application though. is compiled for Intel x86 CPUs: Windows RT version will follow as soon as we are able to compile it. ARM version will also apply to Windows Phone. plays all video and audio formats of VLC, including MKV, Ogg and Mov files or FLAC and MPC; supports the same codecs as the VLC application for desktop, from MPEG-1 to H.265, through WMV3 and VC-1; supports multiple-audio tracks selection; supports embedded subtitles; supports Background Audio playback; features a easy-to-navigate but complete UI, notably for audio browsing; supports Live Tiles! supports removable storage and DLNA servers.
Still, there are certain limitations that have been reported, such as This app is currently slow, and is slower than VLC for desktop for video decoding and has no hardware acceleration; Subtitles support is not very good yet, and notably it only supports embedded subtitles; this is our major point of focus for now. Audio does not seem to work in all configurations; Playlists and streams are not supported in the UI (they are present in the core) It’s clearly not as stable as it should be.  VideoLAN’s President Jean-Baptiste Kempf, has said that fixing bugs is the priority for his team right now. “After that, we need to rework the thumbnails management and a better integration with Windows; also, the app is too slow to start.” he adds.  VLC for Windows 8 can be downloaded from here. 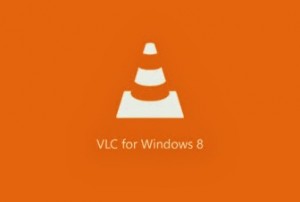 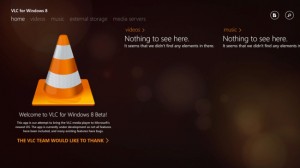