– Get to all your messages without having to open Facebook.

– Bring your conversations to life with stickers and send photos privately.

– Have group conversations and make plans on the go.

– Share your location so people know when you’re nearby.

– Know when people have seen your messages.

– Stay logged in so you never miss a message.

– Turn off notifications when you’re working, sleeping or just need a break.

Facebook Messenger for Windows Phone 8 importantly doesn’t support a few features available for other platforms, such as voice messaging, and chat heads.

The Windows Phone blog notes, “With Facebook Messenger, you will be able to see who’s online for a private or group chat, send a private message, and bring messages to life with pictures and stickers. You can also share your location so people can know if you are nearby. All your Facebook friends are automatically added to the People Tab for you to get started sending messages but you can also import new contacts too.” Read the QR below to download the messenger: 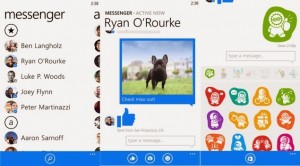