While Bitcoin made news last week for reaching a new all-time high, the cryptocurrency closed the week in a downward spiral. However, the rise in investor enthusiasm does not appear to have subsided just yet. The world’s most popular cryptocurrency began trading on Monday at Rs. 47,36,579 (about $63,236), up 1.41 percent in the previous 24 hours.

At the time of writing, the largest cryptocurrency asset by market capitalization is trading at Rs. 48,50,015 (about $64,750) on Indian exchange CoinSwitch Kuber, representing a 1.38 per cent increase over the day’s starting price of the asset.

Investors are now moving their attention away from Bitcoin’s recent surge, which has been attributed to the launch of multiple Bitcoin Futures ETFs in the United States.

Also Read: All You Need To Know About Bitcoin

With the potential of Ethereum-based exchange-traded funds (ETFs) on the horizon, Gadgets 360’s cryptocurrency price tracker indicates that Ether might experience a significant surge in the near future. Ether is presently selling at Rs. 3,23,628 (about $4,320), a 1 per cent increase from its week-opening price of Rs. 3,14,238 (approximately $4,195) on Monday.

It was the second-most popular crypto-asset, ethereum, that reached an all-time high last week, albeit the achievement went unnoticed due to the attention focused on Bitcoin at the time. Although the values had dropped significantly by the end of the week, investors remain optimistic about a significant increase in the near future.

Shiba Inu and Dogecoin, two memecoins that have seen significant growth in recent months, have done so once again, for reasons that are unclear. Elon Musk, the ‘Dogfather,’ tweeted a photo of his puppy on early Sunday morning, sending SHIB flying to an all-time high. However, he then reacted to a tweet noting that he owns “None,” dampening the excitement. Dogecoin, on the other hand, has gained more than 8 per cent in value, selling at Rs. 21.22 (approximately $0.28) at the time of publication.

While Bitcoin-linked exchange-traded funds (ETFs) are the focus of attention right now, Ether’s price swings suggest that investor interest has been shifting away from Bitcoin in the wake of the introduction of a Bitcoin futures ETF in the United States last week. Aspects like the expansion of decentralised finance (DeFi) and the current craze for non-fungible tokens (NFT) are also contributing to the emergence of Ethereum-based cryptocurrencies. 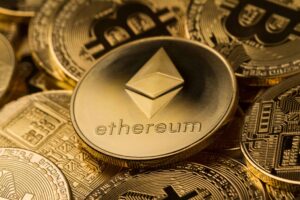