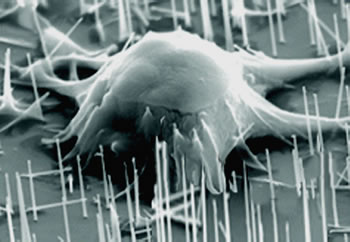 ‘Mortality is which makes a human and a human will age with time to meet its end.’ It is a great saying and is aptly true. It has a lot of meaning to convey when reading within the lines but literally it also displays the summary of life. Aging is inevitable just like death. Though there are means to defy aging to a little extent and we all know the surgical procedures but they most of the times backfire. Instead of providing you with a flawless skin it gives you artificial looking flabs that cannot be removed. 21st century has seen an increasing trend to keep yourself beautiful and science has come forward to provide answers to keep yourself young but not for long. And yet again science has made a breakthrough to invent a new and refined procedure to capture your youth using nanotechnology.

Aging is caused by cell damage that becomes irresistible with the passage of time. The main aim is to reduce this damage to reenergize the tissues which will eventually make you look young. A team of researchers from the Indian Institute of Science have claimed that they can reduce the ageing process by using nanowires made up of vanadium. This will not only provide a solution for aging but will also provide an aid for many other cardiac disorders and neurological disorders including Alzheimer’s and Parkinson’s disease. Now these diseases can easily be treated using this technology which were once thought to be inevitable with old age.

During the process of normal cellular metabolism reactive oxygen species are produced. When this factor increases cellular structure gets damaged as normal redox state of cells is disturbed. This is what causes aging. ROS causes oxidative stress which is responsible for various symptoms like simple greying of hair prematurely and also serious ailments like cancer, diabetes, arthritis, ageing and kidney disorders. The medicines used to control these situation also produce ROS but at a very low concentration. This method using the nanowires reduces even the low levels of ROS production. This method mimics the natural detoxification path ways.

The research team was led by Professor G Mugesh and Patrick D’Silva and have successfully shown that vanadia nanowires will solve this problem as they can actually mimic a natural antioxidant enzyme pattern. The team led by both these brilliant minds have proved that when the level of ROS increases due to presence of any ailment, it becomes impossible for the natural defence system of the body to handle it. Vandia nanowires help in controlling the ROS accumulation in the body and stop the cell damage. The crucial task is the entry of nanowires in the cells as the nanowires must be placed correctly inside the cell to initiate the detoxifying process. The research team experimented on human cells taken from different organs and concluded that the nanowires could efficiently enter inside the cells using intricate methodologies. This has verified the theory that vanadia nanowires possess detoxifying abilities for a variety of cells.