Robotics and telecommunication industries have always been in competition neck to neck. If one comes up with a new design, the other is bound to show the world they are not far behind. It is like a constant silent waging war. We have witnessed loads of new telecommunication technology recently hitting the market, some crazy some awe inspiring. So now it was the time for robots to answer, and they have indeed provided a strong one too. Robotics is itself a branch with vast expanses that have yet to be explored. One such step to move further is taken by FujiSoft. They have produced a magnificent example of humanoid robot, the Palro. Given Japan’s rapidly aging population, efforts are accelerating to devise more practical and affordable robots to help seniors handle daily tasks, as well as to cope with a projected shortage of caregivers. Prime Minister Shinzo Abe’s government has allocated ¥2.39 billion in the fiscal 2013 budget to assist the development of such robots and increase their use. “I find them very effective,” Akira Kobayashi, head of the Fuyouen senior citizens’ home in Yokohama, said, referring to the Palro humanoid robot and the Paro therapy bot that looks like a baby seal. Palro is short for pal + robot. The machines since last year have been leased to the residence free of charge under a separate project initiated by the Kanagawa Prefectural Government to promote the use of such nursing devices. The prefectural government also has leased a motorized exoskeleton suit called HAL, or Hybrid Assistive Limb, which allows the operator to walk and perform other activities more easily, to a local hospital to aid rehabilitation programs. At the Fuyouen home, the 40-cm tall Palro provides recreation services to residents by playing games and quizzes, singing and dancing with them. 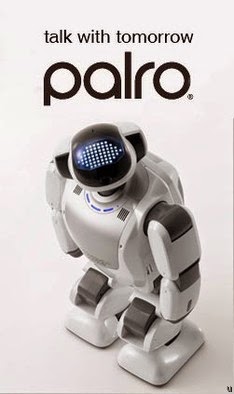 The little creature has obviously mastered our language quite quickly and can be seen below chatting with an even more robotic humanoid about such idle things as the weather, career aspirations, and just how great PALRO is. PALRO’s 39 centimeters tall (just over a foot), and boasts a 1.6GHz CPU Intel Atom CPU, 1 GB of RAM, 4 GB of flash memory, a 3 MP camera, Wi-Fi, 802.11 b/g/n, and a lithium ion battery to top it all off. He’s also equipped with a 3 megapixel webcam Inside that barrel chest is a full-fledged PC with an Atom Z530 processor and an Ubuntu kernel keeping everything in check. It’s available as ever for educational and research institutions for about $3,600. Considering PALRO has 20 DOF, a camera, 4 directional microphones, a speaker, LED arrays in its head and chest, 4 pressure sensors in each foot, 3-axis gyro sensor and an accelerometer. It is also skilled with voice recognition. During the press conference, PALRO responded to verbal commands through speech recognition (“step back” and “introduce yourself”), and demonstrated its face recognition software by visually identifying three people at once. PALRO seems to have a lot of the same software features for 1/6th the price. 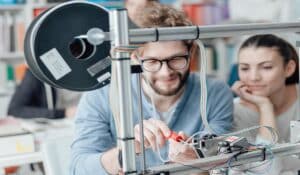 Here’s What Manufacturing will Look Like in the Future