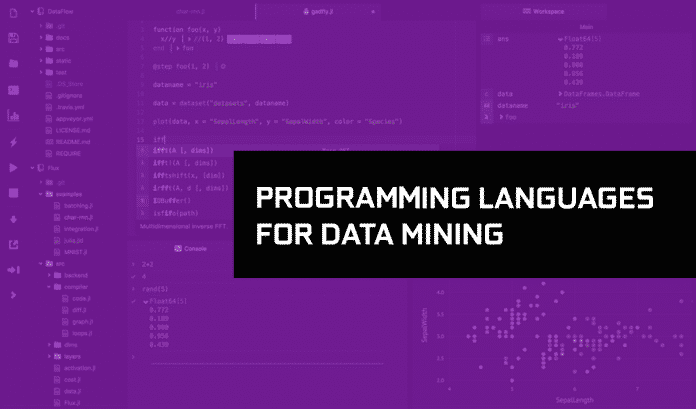 Data mining can be described as a process whereby raw data is extracted to become useful information. It has a rich history that goes back to 1990s. Businesses can use data mining software to obtain additional information on their clients, check patterns in huge data batches and for the development of marketing strategies that are more effective i.e. reduce costs and increase sales.

There are several programming languages used for data mining, the main ones include the following:

R is a language that dates back to 1997. It was a free substitute to exorbitant statistical software such as SAS or Matlab. R programming language can be used to sift through very complex data sets and to create very sleek graphics that represent numbers in a few code lines. This language has the most ideal asset as well as a supportive ecosystem that has been developed around it.

New features and packages were frequently incorporated into its robust function sets. R is ranked as being the most popular language with regard to data science. Its use is on the rise especially for data mining and financial modeling. In financial modeling, it is used as an effective visualization tool.

Most of the data mining is currently done by SAS, R, Matlab, and Java but this still leaves a gap that Julia fills. This programing language has been widely adopted by the data mining industry because of a number of reasons:

Julia is intended to offer the ease of use and productivity of Python with the mathematical prowess of Matlab and the performance of C so you can do it all in one. It supports parallel distributed computing and can be used interactively with data science notebooks like Jupyter. It also supports Lisp-like macros. It is very promising as its data community is in the infancy stage and needs additional packages to be at the same level with Python and R.

Python is also a suitable programming language for data mining with more practical capabilities and fast data mining capabilities to make a good product. It can be used for statistical analysis that was initially the forte of R. It has emerged as an excellent option in the processing of data creating a trade-off between sophistication and scale.

Python is an ideal language for building tools for performing data processing on a medium scale. It is fitted with adequate features and toolkits as well as a wealthy data community. In fact, most banks are utilizing Python to build new products and interface. It is flexible and broad thus people can assemble it easily. However, it should be noted that Python is not the highest in performance. Sometimes, this language powers up large-scale infrastructure.

What Exactly is Google’s Algorithm And How To Use It To Your Advantage?

Everything a Programmer need to know about GIT and SVN

Julia vs Python: Which programming language should you learn?