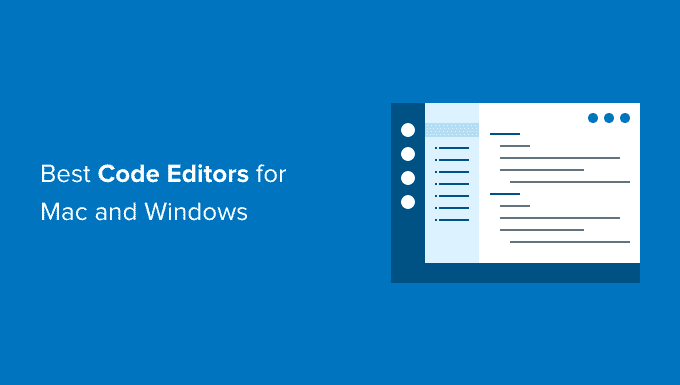 The top-tier code editors provide a wide range of features. Quick and adaptable user interface that improves productivity while writing code. Features that will assist you in checking your code for bugs and locating problematic areas. Functions can be modified without much effort, letting you design a user interface as well as a user experience that perfectly fits your needs.

As you go through your studies, you may encounter professors who have a strong preference for one particular text editor over another; whether you decide to employ the same editor or one of your own choosing is irrelevant so long as you are confident in your choice. To improve as a developer, do whatever increases your productivity.

With that being said, here are the best Code Editors for Web Development.

As far as code editors go, Sublime Text is the one that ushered in a new era of productivity. The program is easy to use, quick to load and prepared to modify your document practically immediately after you click on the button. Because of its quick response time, it is often considered the greatest code editor available. A few seconds doesn’t seem like much, however, if you wish to load a file and perform a fast modification, the delay might get irritating. To many people’s surprise, Microsoft’s code editor, Visual Studio Code, is available for download and use without restriction. It’s the most integrated development environment (IDE) like of the code editors here. While it is quite stable, it is also among the most time-consuming applications to launch.

However, when utilizing it, VS Code is speedy and capable of handling quite a few fascinating jobs, such as making rapid Git commits or quickly accessing and organizing the contents of numerous folders.

Atom is a code editor created by the GitHub team. There was a lot of inspiration from the modern design of editors popularised by Sublime Text when it was first being developed. Nonetheless, there are significant differences: Atom is an open and free text editor that integrates seamlessly out of the box with the version control systems Git and GitHub.

The efficiency and stability issues that plagued early versions of Atom have greatly lessened in recent years. Sure, it takes a little longer to start up than some other editors, but once it’s up and running, it’s as fast and dependable as the others. Some of the most seasoned developers still prefer working at the command line using this program. For some, Vim may be the most divisive of these text editors. In addition to being bundled with Linux and macOS, Vim is now downloadable for Windows.

Many veteran developers and keyboard aficionados swear by Vim. Extremely solid and speedy, Vim is a delight to use for both seasoned command-line pros and curious newcomers.