Ethernet is essentially a standard communication protocol that is used to connect computers together in local area networks (LANs). It communicates with and receives data through the use of cables. Communication between two or more distinct types of network cables, such as from copper to fiber optic and vice versa, is made easier as a result of this technology.

The card normally contains two ports, which can be used to connect two different types of network cables to one another. If you have any queries about the functionality of fiber media converters or Ethernet networks, this post will try to address them as best as it can.

What is an Ethernet Network, and how does it work?

As previously stated, an Ethernet network is used to establish a local area network and to connect numerous computers or other devices such as printers, scanners, and other similar devices to a single network.

A variety of topologies, including star, bus, ring, and others, are used in an Ethernet network.

As the name implies, this is a very fast internet connection, capable of transmitting and receiving data at speeds of up to 100 Mbps. These networks are typically supported by twisted pair or cat5 cable, depending on the configuration. If a laptop, camera, or any other device is connected to a network, it will run at 10/100Base Ethernet speeds on the Ethernet side of the link and at 100Base on the fiber side of the link, respectively.

This sort of network transmits data at even faster rates, at around 1000 Mbps or 1Gbps than the previous type of network. In comparison to Fast Ethernet, which is being phased out, Gigabit speed represents a significant improvement. In this form of network, the data transfer speed is determined by the contribution of all four pairs in the twisted pair cable. When using CAT5e or other modern cables to connect video calling systems, this network type finds a lot of use in the industry.

This is an even more advanced and high-speed network type, capable of transferring data at a rate of 10 Gigabits per second or higher. It is supported by twisted pair cables, such as CAT6a or CAT7, as well as fiber optic cables, among others. This network’s coverage area may be increased to around 10,000 meters by utilizing fiber optic cable.

This form of network necessitates the use of a switch or hub. In addition, a standard network cable is used in this instance, rather than a twisted pair cable. Network switches allow data to be transferred from one device to another without interfering with the operation of any other devices on the network.

Ethernet networks can be either wired or wireless in nature. There are many different types of cables that can be used in a wired network. Here are a few examples of Ethernet cables that are often used: 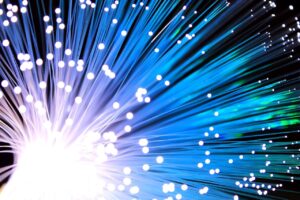 What is Ethernet? Advantages and Disadvantages over Wi-Fi