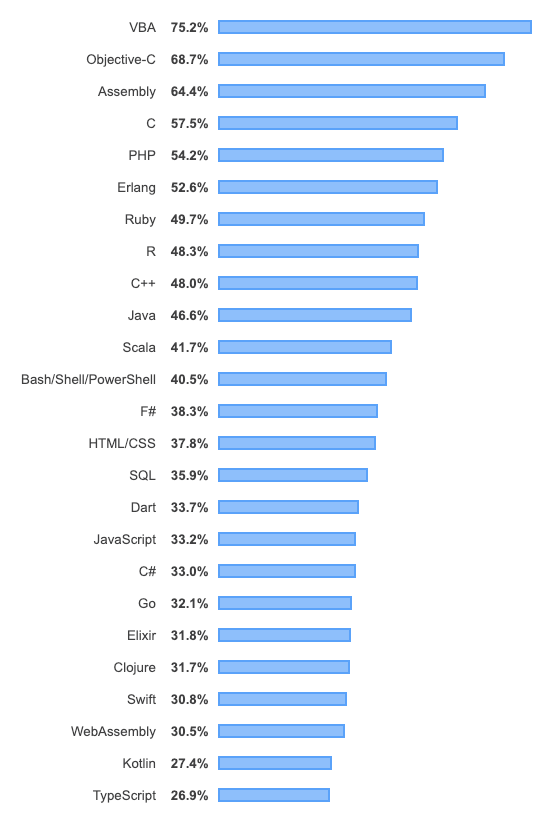 More than 75% of people working with Visual Basics for Applications (VBA) have no interest in continuing it. Visual Basic is an event-driven programming language developed by Microsoft. It is primarily used with Microsoft office applications such as MSExcel, MS-Word, and MS-Access. One of the major advantage with VBA is you can build powerful and useful tools in MS Excel using linear programming.

Objective-C was initially developed with an aim to build a more flexible object-oriented programming language. It was then adopted by Steve Jobs’ computer company NeXT and formed the grounds for Apple’s popular desktop and mobile Operating systems: OSX and iOS. But as per the recent survey, more than 68% of developers showed no interest in continuing it. This trend is obvious because, in recent times, Apple is also moving away from C-based languages and replacing Objective-C with Swift.

Assembly, being the third most dreaded language is somehow struggling to create an interest among programmers. Despite having many advantages such as less memory usage, time efficient and uses like low-level embedded system, it seems people are in no mood to take it further. More than 64% of respondents of the survey showed disinterest towards this language.

C programming language is the mother of all languages. It’s widely used for developing operating systems, firmware software and in other system development. Though the situation is changing still most of the students starts their programming journey with the C language but later switch to other languages. As per the report, 57.5% of programmers are working with this language but don’t want to take it further.

PHP is the fifth most dreaded language of 2019. More than 54% of programmers who participated in the Survey said they have no interest in continuing their career with PHP. If you are a fresher, you may find a lot of openings for PHP developers but after gaining a certain experience, you’ll have to upgrade your skills and become ready for upcoming technologies like AI, ML, etc. PHP is still a popular language but you can’t ignore other server-side languages and their advantages.

I understand every programmer has their own preference but if you keep upgrading yourself continuously, you’ll never face such barrier or any other job security fears. So which programming language you are currently working on? Tell me in the comments section below.

1 thought on “Top 5 Most Dreaded Programming Languages of 2019”