Many Canadian companies are considering if they should use a Canadian host or an American hosting company. There are a number of benefits and drawbacks with each option. DMCA concerns make some shy away from US-based hosting services to avoid having information seized by US government officials. Canadian web hosting providers do not need to comply with DMCA takedown requests immediately. Additionally, in the past, Canadian courts have denied overly broad search and seizure requests made by the DMCA.

However, things are changing in the way the Canadian government views online privacy. These changes may impact a business’s decision as to where they want their server located.

Consumer privacy concerns in Canada are at an all-time high. The Canadian government has responded to these concerns by working to develop a data strategy designed to strike a balance between supporting innovation while simultaneously protecting the privacy concerns of its citizens. This includes providing more transparency for customers while simultaneously giving the privacy Commissioner more power to enforce the laws. A bill that has been under consideration by the Canadian Parliament would call for fines up to $30 million if there are privacy related violations. 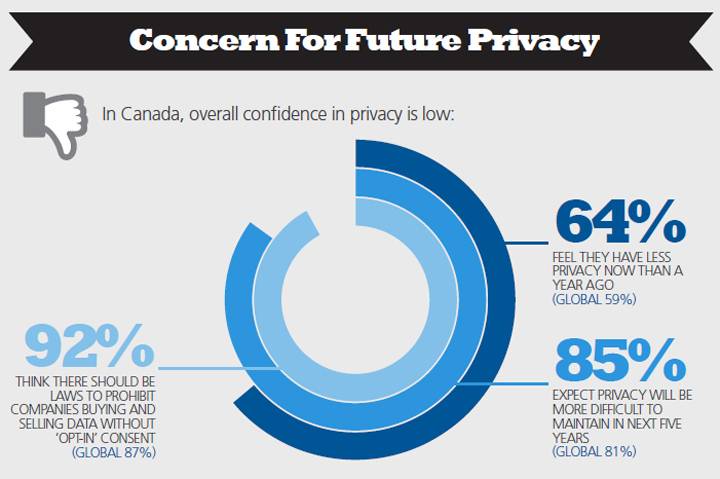 This is not the first time that the Canadian government has addressed privacy concerns. Back in June 2015, the Personal Information Protection and Electronic Documents Act became law. This was followed by the Digital Privacy Act. This latter act made it mandatory for the private sector to notify clients of a breach of data. It also gave the Privacy Commissioner more power. The challenge that the Canadian government is facing, as are many governments around the world, is finding the right balance between encouraging innovation while at the same time protecting the privacy of people. Protecting people’s online privacy has a twofold benefit. On the one hand, it minimizes the chances that a person’s private information would be used in a dangerous way. On the other hand, when people know that their data is being protected, they feel more confident using the Internet for transactions. This will help the Canadian economy to continue to thrive in a world that is quickly placing more emphasis on digital transactions as opposed to those made with cash.

As Canada addresses their digital privacy concerns, they are looking at it from three angles: preserving innovation, work in the future, and maintaining trust and privacy. To accomplish this goal, the Canadian government has established a series of roundtable discussions. Everyone from private citizens to businesses and institutions of education is invited to take part in these conversations.

The goal is to see how Canadian businesses are able to compete with the world in a digital age. How can Canadian businesses take the traditional approaches that they had been using for decades and adapt to modern digital techniques? Much of the focus is on helping businesses identify data-driven technologies and see the importance of implementing them.

Next, the Canadian government is interested in helping businesses better understand how new technologies may change the way Canadian citizens work. What effect will digital technologies have on the employment landscape a decade or two from now?

Finally, they need to find a balance between privacy and trust. Businesses in the technology field thrive on innovation. If left unchecked, this innovation runs the risk of endangering the private information of the very customers it depends on. So the goal must be to strike a balance between trust and privacy.

How Businesses Are Affected by These Changes There are multinational organizations working in Canada that are in compliance with GDRP (General Data Protection Regulation) as well as US data breach laws. These companies will likely already have the measures in place to meet the requirements that will be laid out by the Canadian government for protecting consumer data. Canadian businesses should be aware that upcoming changes in Canadian law will require them to not only notify their customers but also the Commissioner when there is a breach.

If a Canadian company is found non-compliant with some of the newly enacted data security laws, they may find themselves facing fines up to $100,000. That may seem like little when compared to the millions of dollars of fines that are possible under GDPR. However, these fines can quickly add up, especially for businesses that are multinational or for businesses that find themselves non-compliant with a number of regulators.

Another factor that’s going to keep Canadian businesses on their toes when it comes to protecting client’s private data is class-action lawsuits. There are a number of companies that have had major breaches that are facing lawsuits that drag on for years and can cost millions of dollars.

Where Should Your Hosting Provider Be Located?

The web hosting industry has grown tremendously in Canada over the past few years. While changes to privacy laws may play a role in the decisions made by business owners going forward, other factors such as SEO benefits and pricing should be considered. Additionally, the location of your audience is a factor. At the end of the day, you should make sure to review your hosting options so that you can make the right decision for your business today and in the future.

It will be exciting to see the Canadian government and Canadian businesses work together to meet the challenges of encouraging innovation while at the same time protecting the data of their clients. Do you feel that Canada is moving in the right direction? We look forward to hearing your comments in the comments section below.