PHP – world’s Most Loved and Most Hated Programming Language

In 2004, when Mark Zuckerberg sat down to create the site that needs no introduction, he chose PHP. Moving forward the code grew and it is currently one of the biggest websites the world has ever seen. If you know the early history of Facebook, you’d know that it was not meant to be the behemoth that it is today. There had to be something wise about Mark to choose PHP for the task and something equally incredible from PHP to carry his website to create a worldwide phenomenon. Probably it is the same thing in PHP which attracts or attracted anyone else to work with it.

Welcome to The world’s most loved and most hated programming language – PHP.

PHP was originally called PHP/FI (Personal Home Page/ Form Interpreter) in 1994 when it was originally designed and was renamed to PHP Tools in 1995 before it was renamed to just PHP in 1997 with the release of version 3.0. The initial name of PHP clearly suggests that it was not designed to be what it appears as today – the king of web programming language. The initial public release of PHP in 1995 had quite surprisingly a large set of the basic capabilities that it still has today and made mostly internal improvements across versions.

Check: 20 Interesting facts about PHP every developer should know

PHP is known for being one of the easiest programming languages to start off with and is thus used by a large number of programmers who are starting out.

Another point where PHP shines out is being an almost web-exclusive language. While PHP can be easily and effectively used for system scripts, it was built for handling websites and flaunts features which address issues specific to web development such as handling forms submission, user sessions, cookies and loose data types.

PHP is designed to work in a ‘single request-single response’ environment where the script starts working when a request comes in, processes the request, generates the response, sends it to the client and then exists. The next time the same script it’s requested, it runs again, serves the request and again ends the requests sporadically to the server. At the same time, it can also be used to create sustainable services, which keep running indefinitely. This makes PHP suitable for working with WebSockets API introduced in PHP5.

How does PHP look?

This small program shows a good deal of features of PHP which make web development easy. The output of this program is:

We have shown a simple example above.

Check: 20 Interesting facts about PHP every developer should know

You can learn PHP step by step easily here.

Ananth Talam is a professional blogger, gamer and content developer who develops creative content based on technology, human emotions and entertainment by day. With coffee running through his veins, he enthusiastically battles each day, two shots at a time. 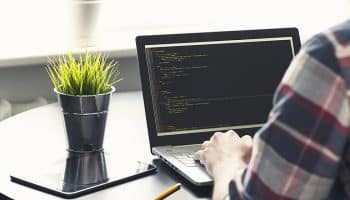 Are You Redesigning Your Website? Here’s How Coders Can Help You Customise It

What is the Difference Between a Programmer and Developer?