As a result of the solar storm that hit this year, SpaceX had to abandon hundreds of its Starlink satellites. The spacecraft’s velocity was diminished when the environment increased owing to the solar storm. Therefore, they were unable to achieve orbit and perished during re-entry to Planet. SpaceX is adjusting its technique for launching and deploying new satellites in orbit to prevent a similar failure in the future.

In the most recent Starlink satellite deployment, 46 satellites were flown to a height of more than 330 kilometers. That’s about 130 km higher than earlier missions, which were also carried out by Falcon 9 launchers. As published by SpaceNews, they were sent up to a height of 200 kilometers. What a difference that makes

The problem is that they can’t sustain themselves at this altitude. Working at a height of almost 500 kilometers, they must go there on their own. Previously, SpaceX used them at a height of 200 kilometers so they could transport more spacecraft.

The launcher has carried 49 Starlink satellites thus far. This one is just 46, but it needs to soar farther now. The spacecraft is safer at a height of 330 km, where they are shielded from the impacts of solar storms. Even in the midst of a solar storm, they ought to be capable of making the jump to a 500-kilometer orbit.

The danger of space debris increases In the event of a delivery failure, the spacecraft would take significantly longer to fall and combust. Since the satellites only go the whole 500 kilometers to their designated orbital altitude when everything goes well. While the new approach will keep satellites safe from solar storms, it will raise the danger of orbital debris if spacecraft fail.

In 2019, SpaceX began building its Starlink Internet service, which it is now selling for 99 euros a month (including in Austria). And over 1,500 satellites are presently operational, and by the conclusion of the expansion phase, SpaceX hopes to have launched about 30,000 more. 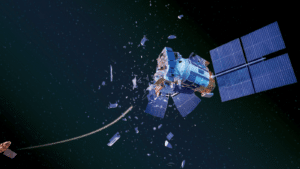