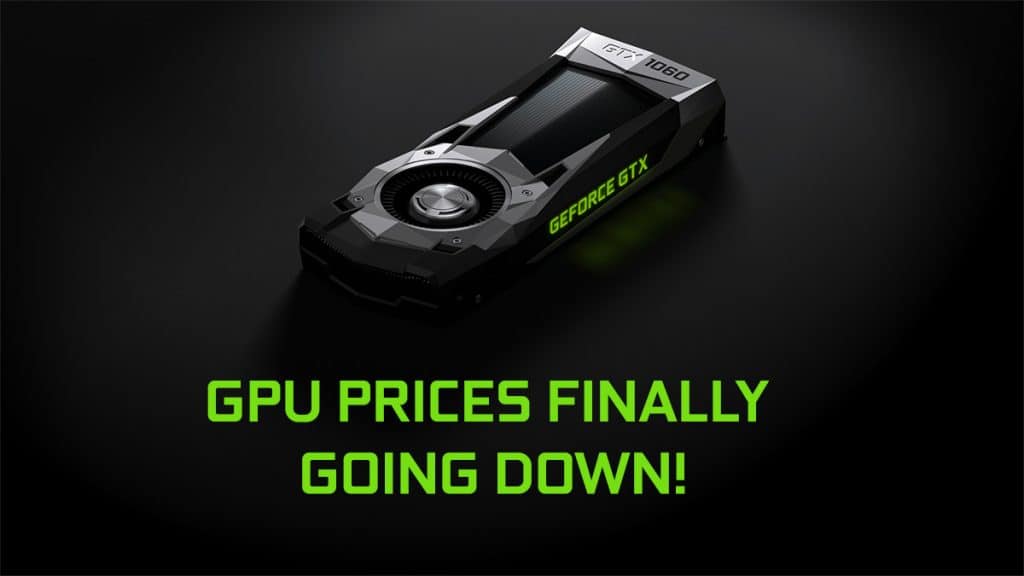 We are all well aware of how Crypto Currency took over the GPU industry. We are also aware of how prices for cheapest of the cheap GPUs increased exponentially. All thanks to Bitcoin’s volatility, GPU prices are back to normal now. Is this the right time to buy one or upgrade your current GPU? Let’s find out.

What Happened (Some Rant)

Bitcoin happened basically. It’s price skyrocketed to nearly $20,000 during Dec 2017. So everyone who had a decent RX 470, RX 480, or GTX 1060 or higher, either mined for Cryptocurrency or sold their GPU’s for twice their worth to the needy buyers. Companies like ASUS, Gigabyte, MSI and many more took advantage of this increase in demand, and increased GPU prices more than their worth. For example, a GTX 1060 6GB version which would have cost around 24-25k INR was priced at 33k+ INR. In another instance, a friend of mine had an RX 470, for which he had paid 17k INR in the year 2015; which was being sold online for 40k+ INR.  I don’t even wanna discuss the prices of 1080 Ti. They were not even in the ballpark.

Now that bitcoin’s price has dropped, people have either stopped mining or sold their GPU’s, after burning them out; for a cheaper price. Since the demand for GPU decreased, manufacturers also lowered their GPU costs. However, it’s interesting to see that Nvidia is selling the Founder’s Edition Cards for the cheapest price on the market. So if you’re thinking of buying a GPU for your new PC or upgrading, now might be the right time. So let’s get into the pricing and other details of your favorite GPU.

The partner Cards of Nvidia and AMD have reduced their GPU prices but it’s not that significant that you could go out and grab one off the shelf immediately yet satisfactory enough to say the worst is over! With all that introduction lets get to the guide.

When you hear the word budget, you immediately picture a GTX 1050 or a 1050Ti. Well, you’re not wrong, the GTX 10 series budget cards are of a great value. If you have couple thousand bucks lying around you could even get OC versions of the same. The GPU’s I have listed below are great for eSports titles and those gamers who are starting with their first PC build or looking for entry-level gaming.

Suppose you intend to go for sub-10k INR GPU, then worry not my friend, Nvidia (not me!) still has you covered with a GT 1030 DDR5; being their latest budget card and from Team Red we have the RX 550. I wouldn’t suggest going for GT 710 or 730 mainly because they’re quite old and probably only 750Ti still manages to be near the 10 series only because of its price to performance ratio and also popularity.

For optimum performance and keeping the budget in mind, I would recommend going for Ryzen 3 (1st gen) chip or an i3 (6th gen minimum). The prices listed below are from trusted Online Computer Hardware retailers and I will also be leaving links for the same.

Now, these cards mean some serious performance. With these installed, you could go for YouTube/Twitch streaming at [email protected] or [email protected] with ease or if you’re just a hardcore gamer, then you’ll get around 350+fps in games like CSGO and nearly 200fps in Overwatch in medium-ultra settings. In terms of editing department, an i5-8400 with a sweet 1060 6 gig will render your gameplay footage as fast as Aubameyang runs in Signal Iduna Park; all while you enjoy your Coca-Cola.

For the following GPUs, I would suggest you guys pair them with a minimum Ryzen 5 (either 1st or 2nd gen) series chip or an i5 8th gen chip for greater performance. With that exaggeration aside, here are the mid range GPUs.

3. Overkill Cards (Sky is the limit, my friend)

Stepping up a notch, we have the high-end offerings from both teams red and team green. For anything above 1lakh INR PC, I would recommend a minimum 1070Ti or even an RX 580 paired with an i7 (6th gen minimum) or Ryzen 7 series CPU.  The performance you get out of these things will make you future proof for at least 3-4 years. Any of these combinations will easily kick ass in [email protected] streaming in high settings and the same can be said for gaming. As far as editing is concerned, let’s just say you’ll never finish that bottle of Coca-cola for a 5min render 😛

If you might have noticed, there are a lot of Armor cards in the lists. Well, that’s mainly because they’re quite reliable and offer great performance for the value. Also, I’ve mostly mentioned the cheapest of the options, if you have the money, then look around for better versions of the same in the sites, bookmark them, do your thing.

You could also say “hey where are the Amazon or other retailer links ?” Well, I chose to omit them because Amazon is costly AF and other retailers cost ±10% the same as I’ve mentioned. If you’re interested in other retailers as well then, please look for Vedant Computers or TheITDepot. They’ve their sites up and running (also have local stores) and provide great service as well.

PS: I’m not sponsored by any of these retailers nor the GPU manufactures. Also if any card manufacturer is reading this, I’m open for Paid Promotions!

Get whatever card suits your budget. It’s your money, I only gave you the options that would seem apt for the budget. In the end, it’s still your PC, customize it according to your needs. And yes this is the right time to buy the cards. Probably in a month after publishing this article most cards will be out of stock, so hurry up. Hope that helps. Stay tuned for more gaming stuff like this!