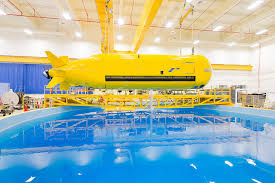 Boeing makes a bold move in undersea exploration with the development of a new autonomous submarine with 32 feet long that can remain underwater for up to three days at a time.

Boeing is delving into this territory with the creation of its Echo Seeker. The Echo Seeker is the descendant of the 18-foot Echo Ranger, a smaller submarine that Boeing developed about 10 years ago to explore shipwrecks off the California coast.

This yellow submarine can dive up to 20,000 feet deep for oversea exploration for both military and commercial endeavors. It can travel at a speed of 3.5 mph, with the ability to explore 265 miles before needing a recharge.

A team of 50 people took 3 days to build the Echo Seeker, according to Boeing. This can identify dangerous objects, such as canyons, and know to avoid them. It can also return back to its present location and swim in circles once a mission is complete.

Watch a video below of the submarine taking a test dive in the Huntingdon Beach, Calif., Boeing facility.

Boeing says these types of autonomous submarines are likely to expand in years to come, and the company expects their ability to carry larger payloads and stay underwater for longer missions will only increase.

In addition, it has the ability to head to the bottom of the seafloor and drop anchor to conserve battery power.

This submarine from Boeing can complete undersea missions and search for sunken ships and aircraft in a more cost-efficient way.